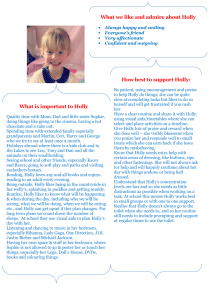 Holly was born with a chromosome abnormality which was diagnosed following genetic analysis at the age of fifteen months when she was failing to meet the usual childhood milestones. How this affects her is that she has global developmental delays in all aspects of physical, emotional, social and intellectual skills, so although she is eleven right now, developmentally she has more in common with other children of about four or five.

Holly and her parents moved to a new area the year before she was due to start secondary school, a time during which they were beginning to realise as a family that she was going to benefit from going to a “special” school, as she was simply too vulnerable for mainstream secondary education. Her parents had done a great deal of research before they moved, checking out the local schools and visiting them to talk about Holly and her particular needs, and had settled on one school whose head teacher felt sure she could provide a safe, fun environment in which Holly would thrive.

However, as time progressed and choice of schools began to be the hot topic of conversation amongst parents and teachers alike, Holly’s’ parents felt that every time they mentioned  their preferred secondary school they were met by lots of sucking in of breath through teeth and comments like ‘it’s a very sought after school you know’, as if the prospect of Holly being offered a place there was highly unlikely. After visiting all three specialist schools in the area, two of which were twenty miles away from the family home, they concluded, as did the head teacher of Holly’s primary school and the Senco of the chosen Senior school, that this choice would indeed best meet Holly’s needs.

The family prepared a one-page profile in time for Holly’s transfer review. The unit manager at Holly’s primary school was so impressed with the document that after the meeting she was in touch with the local authority to find out more about one page profiles and person-centred planning and reviews, and booked herself on a two day course. She was subsequently granted permission to pilot both one-page profiles and person-centred reviews within the specialist provision unit at Holly’s primary school, with a view to potentially rolling the person centred approach out for all pupils, not just in the special support unit, but across the whole school.

Holly’s application to the special senior school was initially unsuccessful, and she was offered a place in the local mainstream comprehensive. Both the SENCO and the head teacher of the mainstream school agreed that they could not meet Holly’s needs, and after a person centred appeal, was put forward, focussed around the detail of her one-page profile, the decision was overturned within two weeks and a costly and stressful tribunal was avoided. Holly started at her new school in September (2013), and is thoroughly enjoying her new environment supported by teachers who feel they knew her far better from day one because of the information contained in her profile.